http://www.zshare.net/audio/667332287e992010/
1) 1) When and since (as,like) you discovered that you liked the jazz/blues?.
1. I first discovered I love Jazz and Blues when my mother brought home the soundtrack for "Lady Sings the Blues" . The singer was Diana Ross playing the role of Billie Holiday in the American movie version of Billie's life story. I fell in love with every song and discovered that my voice was suited for that style of music.
2) Your principal influences?
2. Once I started looking into the compositions of that era when Billie Holiday was popular I discovered many other singers who I loved like Dinah Washington, Ella Fitzgerald, Etta Jones, Bobby Darrin, Peggy Lee, Nat King Cole, Charles Brown.
3) About that situation you think that the blues/jazz is a present?
3. I think the current state of Jazz and Blues in American has come to a slow ending because many of the youth here have not been exposed to the roots of American Music and where all the current music comes from. I also feel that Jazz and Blues are some of the greatest American Art forms and the arts are not being supported properly in my country. Art requires concentration and listening, and the attention span of the youth is growing shorter and shorter.
4) You prefere jazz or blues music?
4. I love most forms of Jazz and Blues as long as the arrangements are creative and fresh and the lyrics are interesting, not just cheap imitations or mimics .
5) Do you know something of the Spanic blues?
5. I know a small amount of Spanish Blues and I must say I love the men!
6) Me mention 10 cds that you believe that they are indispensable in a music library that boasts of having good music?
6. Ten cd's I love are: Karin Allison-In Blue, Joni Mitchell-Courts and Sparks,Bonnie Raitt-Bonnie Raitt Collection,Jeff Buckley-Grace,Lyle Lovett and his large band,Nina Simone-Jazz Masters 17,Mahalia Jackson-Gospels, Spirituals, and Hymns,Etta Jones-Lonely and Blue, Deanna Bogart- Timing is everything, Sam Cooke's-Night Beat
7) Since you organize the concerts? That divises do you dedicate to the improvisation in the direct one?
7. I plan every show with a loose set list, but I let my musicians improvise their solos and I improvise as well.
8) That you have next projects?
8. I am currently working on a new recording and I hope to feature Charlie Baty on a few tracks and some other artists that I deeply respect and have learned from over the years.
9) You like does to say something to the people that this reading this one paginate web?
9. I would like people to know that it is important to me to be seen as I truly am, I don't like dishonesty at all and I care very much that the world starts to protect women and children from violent sexual crimes. These things are important to me and if singing gives me a platform to send a message that would be it!
Thank you for your time and interest in me and my music!! God Bless! 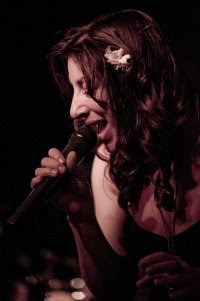